Turkey like China: stop to the import of plastic waste

It’s Turkey’s turn to be tired of accepting plastic waste from Europe. With an amendment published on May 18th in the Official Gazette, the Turkish Ministry of Commerce has banned the import of polyethylene waste, one of the most common plastics, used mainly in the food and packaging industries. The ban, which will take effect 45 days after publication, comes in the wake of an investigation by Greenpeace UK, which literally exposed waste imports into Turkey from European countries, especially the UK and Germany.

The report published by Greenpeace on May 17th has definitely had an impact. Last March, activists from the association visited about ten sites around the city of Adana, in southern Turkey. The photos taken show impressive accumulations of plastic waste which origin, thanks to the brands well imprinted on the packaging, was pretty easy to identify. Illegal mountains of bags, take-away cups and food packaging from some of the most popular supermarket chains in the UK (Lidl, M&S, Sainsbury's and Tesco) and Germany (Lidl, Aldi, Edeka, Rewe), but also from other parts of Europe.
Until just five years ago, as stated by the Greenpeace report, Turkey was just a minor player in the global waste market. But after Beijing's memorable ban on waste imports took effect in 2018, Turkey became the new China for European countries. For the UK alone, plastic waste exported to Turkish territory has increased from 12 thousand tons in 2016 to 210 thousand tons in 2020, or 40% of all UK-branded plastic waste exports. And to make matters worse, about half of it is mixed plastic material, i.e. extremely difficult to recycle.
The rest of Europe, however, contributes as well: in all, about 241 trucks of plastic are dumped in Turkey every day, twenty times more than in 2016.
A practice that, moreover, according to the Basel Convention signed by EU countries and according to British laws would be illegal, since the waste is sent to a territory where there are no conditions for its recycling (Turkey's recycling rate is only 12%). 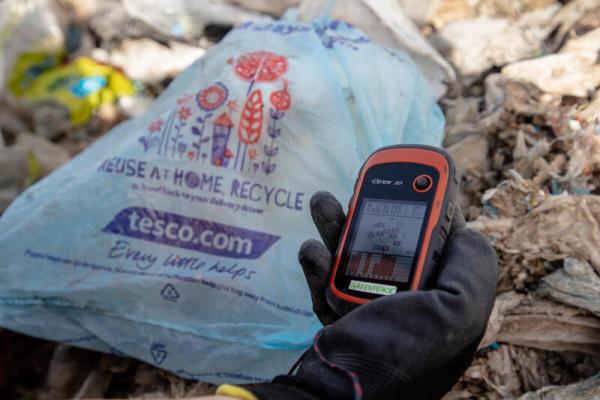 To each their own plastic

“As this new evidence shows, plastic waste coming from Europe to Turkey is an environmental threat not an economic opportunity,” comments Nihan Temiz Ataş from Greenpeace Mediterranean. “Uncontrolled imports of plastic waste do nothing but increase the problems existing in Turkey’s own recycling system. As far as we can see from the data and the field, Turkey continues to be Europe’s largest plastic waste dump.”
By banning polyethylene, which makes up more than 90% of the waste from Europe, Turkish government hopes to contain the problem. And, once again, responsibility is being sent back to the sender, on whom the urgency of adopting effective policies for waste reduction and recycling is pressing.
“It is appalling to see our plastic in burning piles on the side of Turkish roads,” recounts Manfred Santen from Greenpeace Germany. “We must stop dumping our plastic waste on other countries. The heart of the problem is overproduction. Governments need to take control of their own plastic problems. They should ban plastic waste exports and reduce single-use plastic. German trash has to be treated in Germany.”
“The UK’s current approach to plastic waste exports is part of a history of environmental racism carried out through dumping toxic or hazardous pollutants,” explains Sam Chetan-Welsh from Greenpeace UK. “The impacts of plastic waste exports on human health and the environment are disproportionately felt by communities of color. These communities have fewer political, economic, and legal means to oppose toxic dumping, so companies can act with impunity. As long as the UK avoids properly managing and reducing its own waste, it will be upholding this structural inequality. The UK government wouldn’t allow other countries’ waste to be dumped here,” concludes Chetan-Welsh, “so why is it acceptable to make it another country’s problem?”

Images from Greenpeace's "Trashed" report: an activist in the village of Karahan Kuyumcular, in the province of Adana, Turkey.