The Museum of the Non-discarded

In Ozzano Taro, a small village near Parma, the Guatelli Museum is home to thousands of everyday-life objects that have resisted the throwaway imperative. Art, history, ethnography, anthropology, and ecology are only a few facets of what is, above all, an astounding tale.

Some define it as the Sistine Chapel of the poor, a humble Louvre, a Divine Comedy of work tools, of waste and worn out shoes. Famous critics regard it as an extraordinary and unique contemporary art installation. Directors and artists including Werner Herzog, Costa Gravas, and Christian Boltanski were overwhelmed and mesmerised by it. The Guatelli Museum in Ozzano Taro, near Collecchio, in a remote area in the Parma countryside, is one of Italy’s most original and amazing museums. And yet, its creator never wanted to be called an “artist.” Ettore Guatelli – primary school teacher and brilliant outsider – shied away from labels and definitions. The grand storytelling through objects, which he devoted half his lifetime to, is simply (and perhaps defiantly?) the “Museum of the Obvious.”
The obvious consigned to oblivion, at the bottom of a wardrobe, to mould in the cellar or covered in dust in the attic. The obvious that does not get framed, that is not kept in a safe and that (today) is used and thrown away in a landfill where it perishes. The obvious that is a big chunk of our lives. All objects that are often disregarded, Guatelli, an anthropologist by nature, chose to enshrine in his countryside cathedral instead. 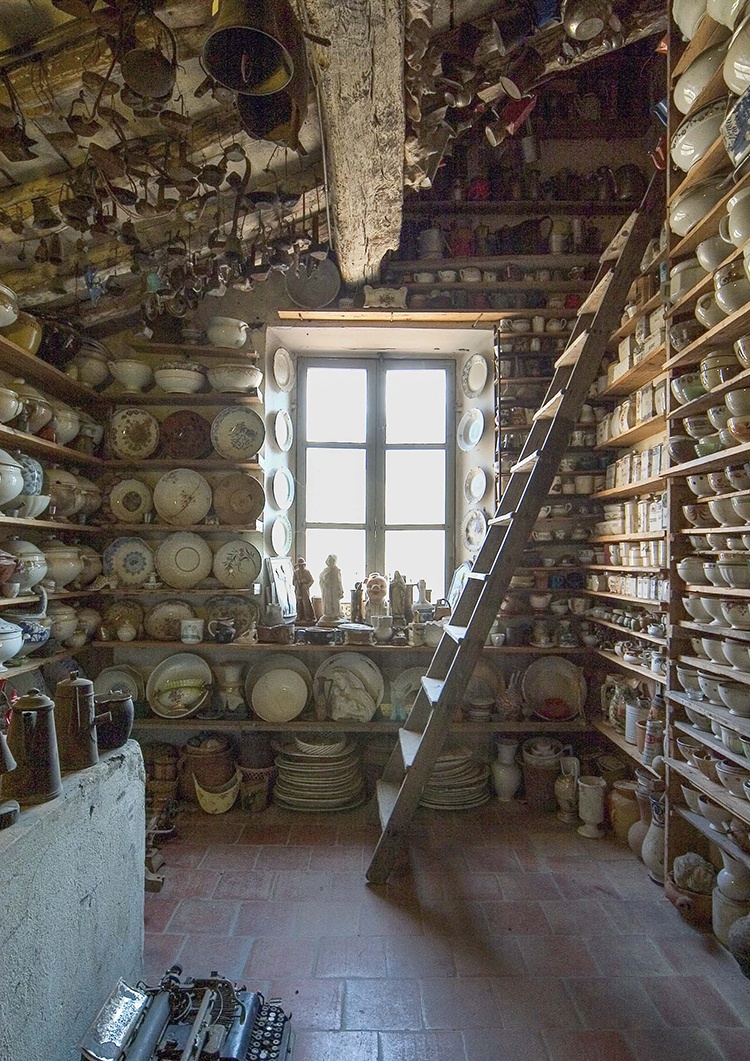 It May Come in Handy…

The rooms, barn and porch of the farmhouse where Ettore Guatelli lived are literally “embroidered” with objects, like a giant mosaic. Amongst its irregular tiles, a more careful observer can spot kitchen tools, scissors, knives, hoes, shovels, blacksmith’s tongs, shoes, tins, baskets, boxes, ploughs, crockery, toothpaste tubes, toys…
“There is hardly a spare inch – says Vittorio Delsante, Chairman of Associazione Amici di Guatelli and guide to the museum – Ettore suffered from horror vacui, he wanted to be surrounded by things.” Indeed, the museum hosts 60,000 objects. He used to stick them to the ceiling and doors, staircases, in every nook and cranny, making up geometrical and ornate patterns, playing with repetition, combinations and excess in a methodical accumulation, quite the exact opposite of consumerism. A frugal collection bringing awareness to the value of even the most humble of objects. It is not the build-up of goods that go out of fashion within a season, but the painstaking salvage of what has been kept, mended, repaired, transformed, patched up to last forever (or at least for a lifetime). “Guatelli comes from a historical period characterised by a subsistence economy, the so called bread age,” explains Mario Turci, an anthropologist and the museum director. “Farmers would not throw away anything: recovery and reuse were introjected values and necessary for survival. Objects were never discarded, because they might ‘come in handy’ and most of the time they were indeed used again and again.” 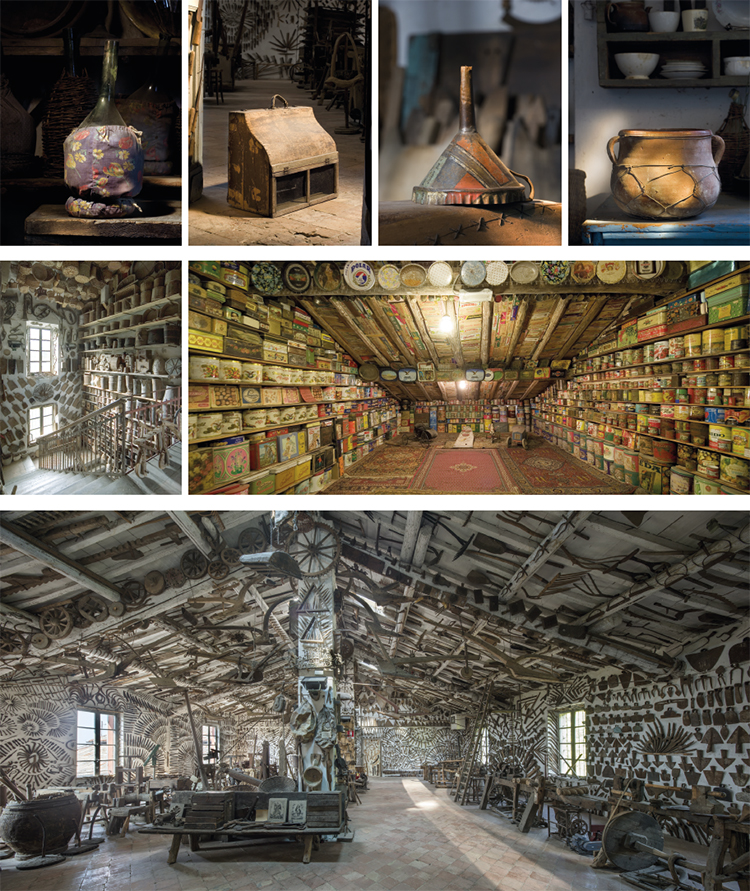 For over thirty years, until his death in 2000, Ettore Guatelli worked on his museum. “He would collect objects here, there and everywhere,” continues Turci, “From second-hand dealers clearing lofts and cellars, to jumble sales; or by visiting houses in person when he discovered that somebody was moving out.” The outcome is a medley collection ranging from a 19th-century carillon to a Commodore C64. On top of the items on show, there are 20 containers crammed full of things, plus the warehouses in the courtyard: “the treasure troves,” as the Guatelli aficionados call them, where so many unknown gems are yet to be discovered. In this rather bizarre maze, the collection occasionally seems to display a few paths, a sort of uncharted territory visible to those armed with enough time and patience to browse. “There are – as Turci explains – certain categories of objects that Guatelli used to absolutely adore. Migrant objects is one of them.” The term, invented by Turci himself, identifies all artefacts linked to creative reusing, i.e. migrating from one function to the next, thus adapting in the spirit of resilience to the needs of the moment. For example, a soldier’s helmet, once a war is over, becomes a brazier or with an added handle mounted on one side, it can become a ladle for sludge; whereas a bayonet acts as a knife for slaughtering pigs; and an old accordion case, with a few alterations, rises to new life as a carrier for homing pigeons.
Then, there are resistant objects, “patch-ups” as Guatelli would define them. “Those that have been heavily maintained up to the limit of their existence. For instance, the worn out sickle turned into a table knife, then into a razor and eventually when there is almost nothing left, into a nail. Or a bed sheet so heavily darned that the fabric is almost unnoticeable: a true monument to bodging.”
Come to think of it, the attribute “patched up” is always associated with a shoddy job, carried out with no commitment or criterion. But patching up, recovering, transforming and recycling were an actual art form resulting from techniques that had been refined over time and employing outstanding skills. A kind of pre-scientific technology and peasant engineering which the Russian painter Vladimir Arkhipov named, in one of his recent books, “People’s Design.” That same ingenuity of the humble to which Guatelli devoted his monument and that, as a teacher, he tried to pass onto his students for them to treasure as reasons for dignity and pride in their origins. 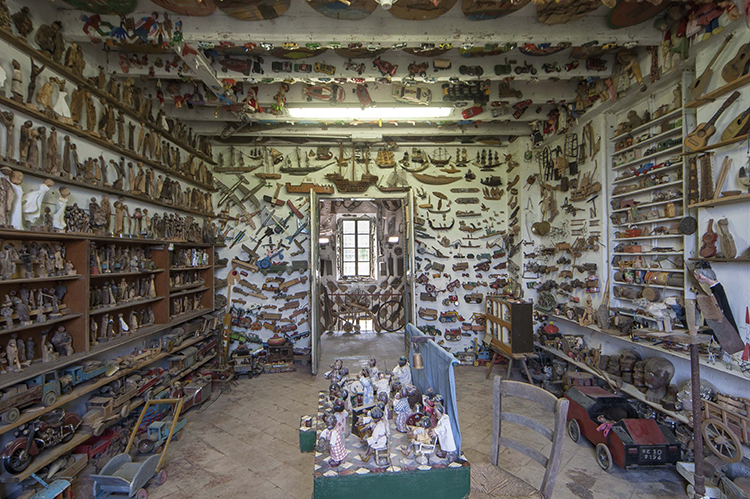 There is a pedagogical and educational aspect to Ettore Guatelli’s work on top of the narrative one. Vittorio Delsante, who got to know him in a small town primary school, describes him as a charming storyteller. “When Professor Pietro Clemente would invite him to the Department of Anthropology to give a lecture, he would carry with him a suitcase full of his objects which he would then start to talk about. The classroom was teeming with people wishing to listen to him as he pulled out his objects, one by one, like a magician. The suitcase-museum is a way to disseminate knowledge still used today by the Association when we organise workshops in schools.”
After all, the Ozzano Taro farmhouse is first and foremost a storytelling museum. “Guatelli’s work – points out Turci – is neither an ethnographical collection nor a ordinary rural life eco-museum. It is a museum of stories. The collected objects are here because they are culturally meaningful for the existence of those who owned them.” For instance, the briefcase made by a soldier with welded tins tells a story of poverty, necessity, departures and even eating habits.
“Even the artful way with which he displayed his collection pieces (‘organising things properly’ as he would put it), was for him another way to attract visitors’ attention and channel it into the stories told by the objects.”
Such stories would become part and parcel of his teaching method. Drawing on Don Milani and Gianni Rodari’s pedagogical activism, Guatelli taught his pupils the importance of doing and the value of things, well beyond their mere purchase and use. “Objects were, according to countryside teacher Guatelli, books that show the world to those that saw very little of it. An object – continues Turci – embodies the work of those that have made it, the state of technologies of a particular historical period, the economy, societies, fashions, habits. And, last but not least, human stories still attached to it.” In short, A Life Cycle Assessment of its soul.
In an era of planned obsolescence and death, where goods are quickly consigned to oblivion, heavily patched-up and memory-loaded things collected by Ettore Guatelli are a moving and hard lesson. Before there was talk about the circular economy and encouraging people to save resources, the proto-ecologist and anti-waste message by this countryside teacher was already underway. Above all, as a warning to respect the value of every object, because even the humblest thing is the fruit of somebody’s hard work and therefore has a story to tell.

All images: Photos by Mauro Davoli 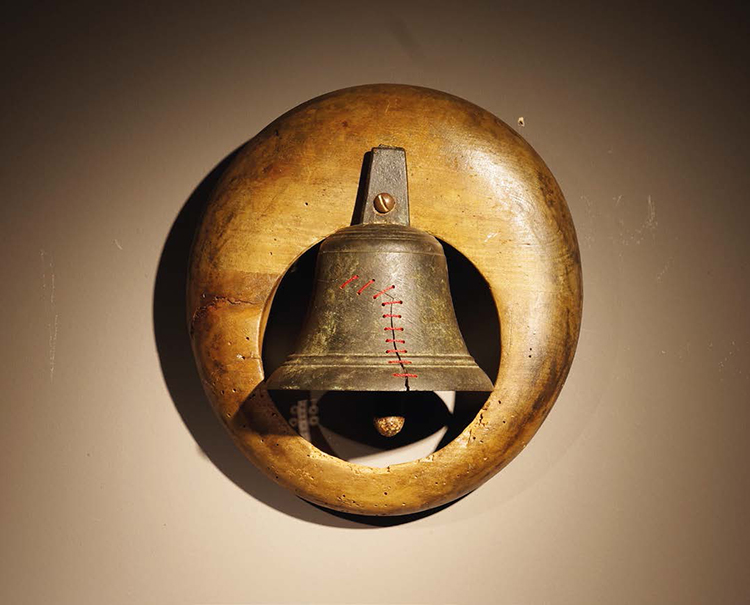 There is a metaphorical and material common thread connecting Leonardo Dingi’s works. A fine sewing thread meandering through the cracks of an old off-key cowbell, as if to darn it, which then runs through the burnt pages of a book conjuring up old religious bloodsheds; it wraps around the waist of Christ on the cross, crossless and headless; it holds to the nooks of a cabinet, the limbs of a broken doll in a disturbing scrambled collage. It fastens to new wrought-iron props small sealing wax crucifixes, shoe trees, candelabra deprived of their candles. Everything is missing something: a piece, an order, a function, a complement. But in such dearth, they find a meaning and tell a story. 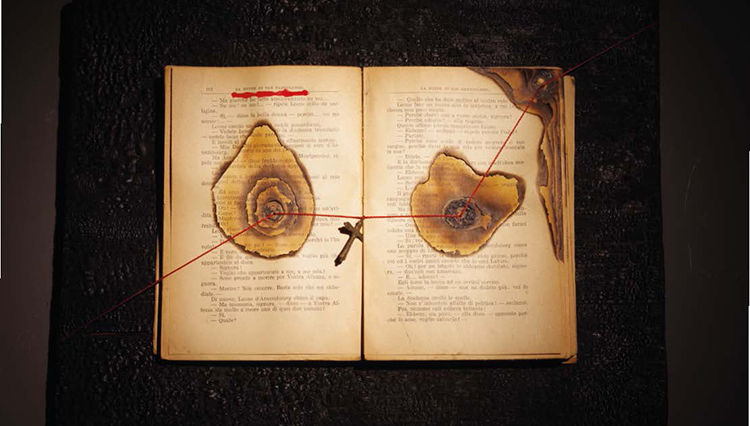 Bologna-born artisan Leonardo Dingi, just like Ettore Guatelli, is interested in the stories attached to objects. And, just like the Ozzano Taro teacher, he is reluctant to utter the word “art”: “I create ‘things’ with recovered pieces and discarded things that I come across,” he explains. It is no coincidence that the first exhibition of his “things” was hosted right at the Guatelli Museum. “I have always liked to recover scrap materials to make objects. I used to keep them at home, but then a few years back I started to sell them in the workshop as well: small accessories, mainly lamps, making up the Era collection. However, only a few months ago I tried to move away from object functionality in order to create things with a purely aesthetical value” explains Dingi. 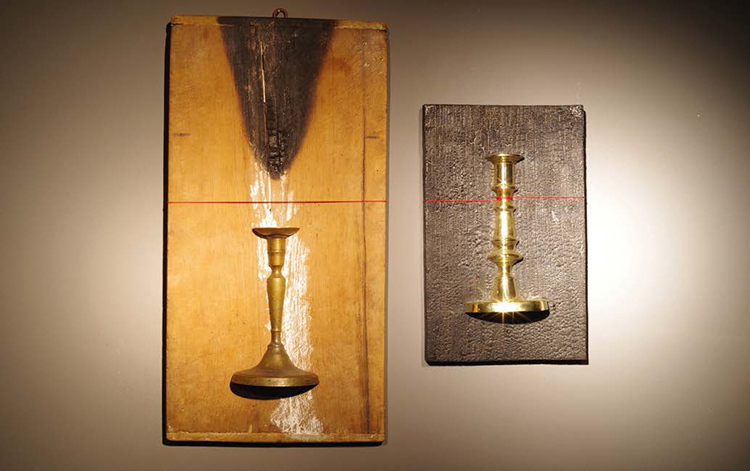 Dingi’s workshop in Bologna has a long history of restoration of metal objects and reproduction of old door handles and latches. His father Silverio opened it in 1961, whereas Leonardo started to work in it when he was still a university student. Fire, melting, cracks and breakages are thus recurrent images in his art work and are the result of a well-established artisan activity, while candelabra and crucifixes are ever present because churches and religious bodies have always been important customers at the store and also because they are a sort of fetishised cultural objects that have been handled, overused, lived; that have received sighs, prayers, tears and perhaps curses. They have now lost their “practical” function, but Dingi’s common thread raises them to a new life.