Coca-Cola has conquered, for the third year in a row, the unenviable podium of the top plastic polluter in the world. This was stated in the latest report by the Break Free From Plastic coalition, which places two other big corporations like PepsiCo and Nestlé, also repeat offenders, in second and third place. The report "BRANDED VOL III: Demanding Corporate Accountability for Plastic Pollution" does not point the finger only on the amount of plastic waste ending up in the environment, but also on the lack of effectiveness and effort that these corporations would have put in their policies of waste reduction.

Data from the Break Free From Plastic coalition's annual report, which includes over 1,900 non-governmental organizations, is based on the work of thousands of volunteers around the world. This year 55 nations participated in the collection and cataloging of waste. More than 346,000 pieces of plastic of different types were collected, then divided and cataloged according to the brands they belong to. The ten largest polluters on the planet were therefore identified, classified according to the number of pieces of waste attributed and the global spread (for example, Coca-Cola is present in 51 of the 55 countries examined: basically everywhere). In addition to Coca-Cola Company, PepsiCo and Nestlè, the following in the BFFP rankings are: Unilever, Mondelez, Mars, Procter & Gamble, Philip Morris, Colgate-Plamolive and Perfetti. 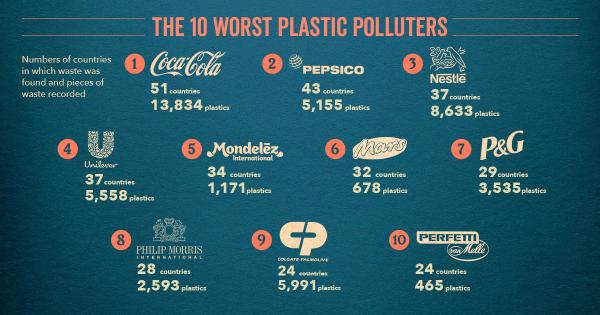 The companies that lead the ranking of major polluters have been on the podium for three years, since the coalition began drafting its report. This means that, despite the public declarations of commitment, there has been no real progress.
“It’s not surprising to see the same big brands on the podium as the world’s top plastic polluters for three years in a row”, said Abigail Aguilar, Plastics Campaign Regional Coordinator, Greenpeace Southeast Asia. “These companies claim to be addressing the plastic crisis yet they continue to invest in false solutions while teaming up with oil companies to produce even more plastic”.
This is what also highlighted the latest report by the Ellen MacArthur Foundation, "Global Commitment 2020": most of the companies that have joined the New Plastic Economy Global Commitment launched by the foundation have focused mostly on single-use plastic recycling policies, leaving out the reuse and reduction of production, the real keystones of the problem.
“The world’s top polluting corporations claim to be working hard to solve plastic pollution, but instead they are continuing to pump out harmful single-use plastic packaging”, said Emma Priestland, Global Corporate Campaigns Coordinator, Break Free From Plastic. “We need to stop plastic production, phase out single-use and implement robust, standardised reuse systems. Coca-Cola, PepsiCo, and Nestlé should be leading the way in finding real solutions”.

From recycled wood, a material that is stronger than steel

Superworms like styrofoam, and that's great news for plastic recycling