Urban Metabolism: the city as a living organism is circular by nature 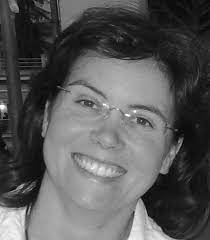 Urban metabolism is an approach that first of all requires starting from a vision: regarding cities as a living organism. It’s not mere philosophical speculation, there are practical reasons to adopt such a model: first, a thorough understanding of urban system’s dynamics and their redefinition in a circular and sustainable way.

Just imagine a sort of monster that keeps on gobbling up food, from faraway places, through complicated transport systems; not all resources reaching it are used for its harmonious growth and wellbeing, many only build up in certain parts of its body, while others are wasted and dumped far away. This is what cities are like: materials and energy come from faraway places and are only partially used, while waste and residues build up as pollution (air emissions, waste, wastewater), preferably on the outskirts, or they get dumped elsewhere, thus becoming another area’s problem.
Material and energy flow meandering through cities is by all means a metabolic process, very similar to that supporting our very lives, if it weren’t for a key detail: it is linear, while Mother Nature has equipped all its living organisms with very sophisticated mechanisms regulating our metabolism, based on cyclical processes.
Urban metabolism is a model helping describe and analyse flows within cities, through the metaphor of living organisms: such systemic vision enables an understanding of all activities within a city in a single model, with an aim to improve its life quality.

The City as a Super Organism

City life relies on its relation with its surrounding environment and with the dense network of local and global resources it feeds on. The faster the metabolism the higher consumptions will be, which causes farmland, forests and biodiversity loss (often in faraway places) and an ensuing increase in vehicle traffic and pollution.
In more scientific terms, one could say that a city is a complex system, made of overlapping components (people, social systems, buildings, infrastructure, services and so on) interacting amongst them in multiple and non-linear relations, while determining circular cause and effects mechanisms, which is why cities display a potentially circular nature. However, they are generally planned and managed in a linear way: the single components are dealt with as single compartments, with no consideration for their interactions. Oftentimes, a key element is neglected, first and foremost cities are made of people.
With the urban metabolism approach, components are instead reintroduced within a sort of “urban super organism” which can be fully analysed and redesigned in terms of innovation and sustainability.

History and Evolution of the Urban Metabolism Model

The concept of urban metabolism was first developed by Abel Wolman in 1965 to study material energy flow on an urban scale. Wolman based his research on a hypothetical city with one million inhabitants and focused on quantifying incoming resources and outgoing residue, while defining urban metabolism as “all materials and raw materials necessary to sustain a city’s inhabitants in their homes, at work and during their leisure time.” After Wolman’s work, research on urban metabolism has intensified and a few cities adopted such approach to study their resource flows in order to improve efficiency, sustainability and resilience.
Recently, a few researchers from the University of Toronto, have re-defined urban metabolism as “the total sum of technical and socio-economic process occurring in cities, with ensuing growth, energy production and waste elimination” (Kennedy et al. 2007). Such definition restores a concept that over the years has included all environmental, social, financial, information flows, while taking into consideration their space-time distribution and related regulating mechanisms. So, over the years, the theory of urban metabolism has evolved: from an analysis of resource flows within urban physical boundaries, towards the use of environmental and social indicators on a larger scale, as to include the infrastructure serving a city located outside its perimeter (such as waste management plants, airports, industrial areas). Such approach can provide a useful key to understanding city complex relations in order to re-design them in a sustainable manner.

At the moment, there are four urban metabolism model’s main practical applications, used by planners and decision makers: reporting of sustainability, taking into account greenhouse gases, assessing urban strategies and supporting sustainable urban planning. If energy, material and waste flows are drawn up through the system and if they are integrated with social, health and economic indicators, we may develop regenerating strategies for our cities, while creating a circular metabolism where resources are recovered and waste is minimised.
To do so, it is necessary to use appropriate tools and study method. CityLoops method set up by Network Metabolism of Cities mapped out 29 frameworks to analyse urban metabolism, used both in research projects and in academic literature: most of them are based on MEFA (Material Energy Flow Analysis), thus adopting an essentially linear approach while other methods are inspired by system dynamics, more appropriate to interpret non-linear complex systems such as cities.
MuSiasem (Multi-scale integrated analysis of societal and ecosystem metabolism) is one of the most interesting frameworks – created for territorial metabolism but also useful for urban metabolism – was developed by Mario Giampietro and his colleagues at Universitat Autònoma de Barcelona; this method focusses on local societal and ecosystem aspects and is based on Nexus. Nexus, an analysis approach of socio-ecological systems developed by FAO, outlines the existing link amongst water, energy and food security to understand the interdependence amongst these sectors and the way they influence other aspects such as climate and biodiversity. 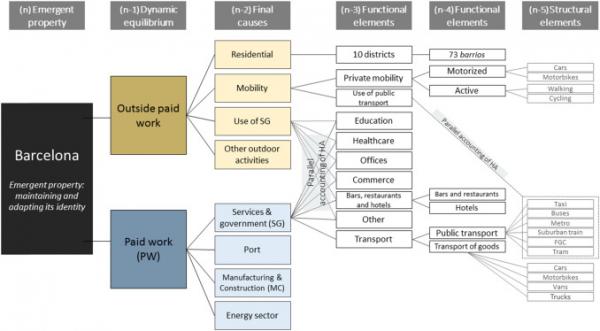 Dendrogram of functional categories through hierarchical level of the city of Barcelona. Source: Pérez-Sánchez et al., 2019 (CC BY 4.0).

One of MuSiasem’s main advantages is to look at the environment at different levels, as if they were Chinese boxes, in order to understand how different levels are interconnected; this approach enables us to get data that are very difficult to obtain with other methods, such as population age groups, the way each one uses its time (working or otherwise), the link between working hours, energy consumption and GDP, but also the impact that economic development has on soil use. This framework has recently been used to evaluate Barcelona’s energy metabolism (Pérez-Sánchez et al. 2019): this study offered an analysis of the use of different energy sources (for instance, electricity and fuels) in relation with different uses within the city (for instance, for public and private mobility, tourism, business and domestic activities) in different space scales (for instance, single buildings, neighbourhoods, and the city as a whole).
This is a great innovation: analysing people’s time use not only enables us to evaluate what and how we do something (the total amount of hours spent annually on different activities), but also to identify different behavioural patterns in different categories. In Barcelona’s case, identifying different activities carried out by residents, commuters and tourists is crucial in understanding the final use of energy: what activity is the main user of what type of energy? Is this use necessary and why? How does Barcelona compare with other cities? Is there room for improvement?
Knowing that different cities express different functions in different ways, using different technologies and energy mixes, makes us understand that energy policies must take into account these specificities: The Covenant of Mayors intends to cut climate-changing emissions by 40% by 2030, but the strategies to reach this generic goal must be specific to each city and carefully take into consideration the balance amongst all the activities carried out, the different characteristics of energy sources and a city’s socio-economic dimension, including the effects on inhabitants’ quality of life. If not, we run the risk that a sudden economic collapse is interpreted as a successful environmental policy in reducing emissions or that goals are achieved through the outsourcing of the most energy-intensive activities to other territories.

The REPAiR project and the regeneration of wastescapes in Naples

One of the biggest limits of such MEFA methodologies is the lack of geographic data connecting matter flows of different areas of a city; on the other hand, the REPAiR Project (Resource Management in Peri-Urban Areas: Going beyond Urban Metabolism) integrates, for the first time, geo-design and LCA (Life Cycle Assessment) in urban areas in a single framework in order to outline specific criticalities at local level and relevant eco-innovations for managing urban metabolism.
REPAiR  is a Horizon2020 project which ended in October 2020. Its aim was to provide local authorities with a system to support their decisions to create tailor-made local development strategies for each area called Geodesign Decision Support Environment (GDSE). GDSE was implemented in six metropolitan areas, including Naples, within the “Living Labs” project which developed transition goals to the circular economy by identifying stakeholders and areas where to apply eco-innovative solutions and strategies at local level.
One of the main issues tackled for Naples Metropolitan area was the conversion of wastescapes, venues located in peri-urban areas which receives metabolic waste produced by the city. These are both waste treatment plants and abandoned areas plagued by waste. Following circular economy’s principles, these degraded areas can be regenerated both from an environmental and social point of view, thus spurring a sustainable recovery of crisis-stricken areas by reconnecting them to the surrounding urban environment.
Thanks to The Living Lab coordinated by DiARC (Università degli Studi di Napoli Federico II), the REPAiR project led to the identification of the main critical areas and the definition through co-design of adequate local strategies based on eco-innovative actions to regenerate wastescapes, including the “Recall – Remediation by cultivating areas in living landscapes” action. Recall offers a reclamation process for the former Scafatella dump site using local vegetable species, such as hemp and reed, able to extract high quantities of pollutants from soil. The use of these plants to remediate soils (phytoremediation) and water (phytodepuration) of nearby Regi Lagni has several advantages: removal of pollutants, soil regeneration, biodiversity restoration and landscape reconfiguration. Moreover, these hardy vegetable species require little care and can absorb huge quantities of CO2. But there’s more: their use can also restore a local historical agricultural tradition, which was present in this area up till the late 1990s thus promoting short supply chain economies. After having been harvested and laboratory checked for the presence of possible contamination, suitable hemp is re-used: different parts of the plant can be used to produce textiles, paper, building materials, personal care materials, animal litter, bioplastics, mulch and compost. Its waste, thanks to a pyrolysis process, can be turned into fuels such as methanol.
“This action can be easily adapted to other contexts and has a triple interpretation making it extremely innovative,” explains Valentina Vittiglio, Recall’s manager. “Circularity principles are applied at landscape level (regeneration), at product/supply chain level, at human capital level (recovery of traditional craftsmanship) with a positive cascade impact on other areas such as soil use and social dynamics.” A virtuous example: there is no circular economy without a local circular regenerative approach.