The Geopolitics of Food. Interview with Tim Lang

Tim Lang favours the long view. You can’t look at the food system without using a complex, holistic approach. No one has a better outlook than the internationally renowned professor of Food Policy at London’s City University. His latest book Feeding Britain , focuses on his home country but his analysis span across the world. His take is that some countries like UK are, de facto, facing a wartime scale of food challenge. Geopolitics and consumer culture are the two main drivers that are slowing down the circular and climate-proof transition of the food system. We sat down for a hour long interview on Skype to discuss: what’s coming next? 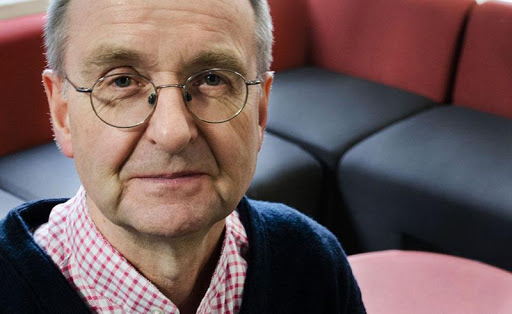 Professor Lang, what are todays’ main challenges in the global food system?
“The trends are the same as ten years ago. Climate change becomes more urgent, biodiversity loss even more. But there is also a new important dynamic: geopolitical uncertainties. I speak from Brexitland, which used to be known as Britain, a nation that has chosen to destabilise the European Union, which is on a steady decline. There are tensions between the United States, China, India, Russia, Europe. Those big macro political economic issues affect what happens in the food system just as much as they shape the car, the packaging or the tourist industry. So, geopolitics is becoming very important. Leaving Europe my country, Britain, is having to think about food security again. And last: there is an urgent need to tackle consumer culture. Driving down the price of goods in order to make them more available has now become a crisis of our own making. It's absolutely clear that the food system in Europe overeats, over consumes, wastes more and more. Even the Mediterranean diet has worsened, transitioned into a rising avalanche of ultra-processed foods, all of which send signals back onto land use, jobs and so on. I have called it the permanent eating economy.”

You have repeatedly said that there is a broad problem of “food defense”.
“When we buy cheap oranges from West Africa, saying we don’t need Spain. Or rely on our relations with US and believe we can get endless oranges from Florida; we are basically exposing ourselves to food security issues. Brexit showed us our fragility. Great Britain was an industrial nation in the 18th century and then became the dominant imperial power in the 19th century and pursued that as a way of feeding ourselves.”

UK was more self-sufficient in food in the early 20th century than it is now.
“True, because we had an empire which we ravaged to keep our tables and bellies full. Then everything started to fall apart. In 1939, the authors of the book called “Our Food Problem and Its Relation to Our National Defences”, (Le Gros Clark F., R. M. Titmuss, published in that year, author’s note) were denouncing our exposure to food insecurity. UK said: ‘We must not put ourselves at risk.’ In 1939, Britain was producing about a third of its food needs. By 1945, in six years, it doubled that.”

This might be true in UK. Can we apply it to Europe as well?
“The geopolitics has become very dangerous, with a rapidly shifting global landscape. The European Union needs to update its thinking on food security and food productions. This is not nationalism nor protectionism, but resilience: we have to be able to bounce back in case everything changes because of a shock. This is food defence.”

How can we change that in the next decade?
“We need something like a food resilience and sustainability act, complete with legally binding targets. Nutritional guidelines should become the basis for food procurement contracts, both public and private. I suggest to run an audit of food production in the UK and the budget for public health should be doubled from £2.5 billion of the £130 billion health budget to £5 billion. We should create new oversight bodies, a royal commission to map a new set of multi-criteria principles for the UK food system, a food resilience and sustainability council and a network of urban and rural food and farming colleges.”

What has changed – for the better – in the last decade?
“Change is very delicate, politically. No politicians want to tell consumers ‘you have to eat differently.’ They say: we must do something about obesity. But they put responsibility upon the consumers. Instead their focus has to be re-design the food economy, from infrastructure – we need more active transportation for better health – to health outcomes (the impact of sugar). However, response is slow, even in the European Union. It took us 20 years to get the QUID, the Quantitative Ingredient Declaration labelling. And yet we know labelling is the weakest and the most useless intervention method. It encourages a little bit of reformulation, but it doesn't tackle consumer culture and it doesn't really address the problem of the commoditization of the food economy. Policies do make change.”

But something has been done.
“It has to be said that the European Union is beginning a little process of change: the Food 2030 Program (the EU research and innovation policy to address the Sustainable Development Goals and the Paris Agreement), the greening of the CAP, the Common Agricultural Policy, are happening, but in the very conventional European way, of slowly doing it.”

Time is ticking. Climate change is worsening, biodiversity is disappearing at alarming rates.
“We have perhaps 20 years to do very big changes, and that will not happen unless consumers are centrally involved in that. Covid-19 could have been an opportunity for that. But we are focusing on getting to normal rather than transforming the economy.”

Vegetarianism and its fringe, veganism is on the rise. Is it a positive signal from the consumer’s side?
“Still a tiny movement. Not sufficiently influential. Today, meat has become everyday food opposed to festival food. Meat is not necessary, but it has its place. The globally consumption of meat and dairy culture is growing, not declining. Therefore, the shift toward vegetarianism barely compensate the rise of meat consumption: the impact of vegetarianism it's small compared to how fast we need to change the food culture and the food economy in the next 20 years to avoid a +4°C climate change scenario.”

There is also bad veganism, which focus on ultra-processed soy-based food or non-sustainable superfood like avocados. What do you think about it?
“It's vegetarian rubbish rather than meat and dairy rubbish. Young people are becoming more vegetarian or vegan, which is good at one level, but not if it is soya that is destroying the Amazon or the Cerrado of Brazil. In general, ultra-processed food it's cheap, highly marketed, with big advertising budgets. What we pay is not food but communication. Think about this: the advertising budget of Coca-Cola, the biggest beverage company in the world, is twice the budget of the World Health Organization (WHO). In UK, while Boris Johnson has invested £10 million for an obesity program private food retailer has invested £1-1,5 billion in advertisement.”

UK is a negative example when it comes to food politics.
“Its dystopian food system emerges clearly from my latest book, where I focused on Brexitland, a declining economy. I did a multi-criteria analysis, applying six criteria: health, environment, economy, social values, quality of food and governance. What emerges is that things got worse. Britain is basically living a post-imperialist food culture. It doesn't want to grow its own food. We have a fragile just-in-time supply chain which could easily collapse and produces only around 50% of the food we actually eat, leaving us at the mercies of the international market, while we use damaging methods to the environmental and human health. Inequality is at all times high, there is a staggering gap between rich and poor in terms of income and therefore access to food. At the same time, we spend billions in our health system because of cheap food. But what is cheap creates vast, unbearable costs elsewhere. Leaving the European Union where it gets 40% of its food, with no plan of what to do next. This is astonishing.”

Big cities have produced important food policies, so has London.
“Can London do much about the food industry? No, it doesn't have the legal power. London has been a very active food scene. The London Food Board has done very interesting work. I'm very proud of it. But have we transformed London’s food economy? I would say no. Have we helped building a movement for sustainable cities? Yes, we have. We have a vibrant, active food movement in 50 cities, the former Sustainable Food Cities Network, now the Sustainable Food Places Network.  And that's part of what was launched in Milan in the 2015 Expo, with the Milan Food Policy Plan.”

Do you think that food policies should be applied at a national level?
“In my book, I say we live in a multi-level world. Action has to be multi-factor, multi-sector, multi-level.”

In your book, you stress the relevance of local production.
“We have focused on mass distribution of companies like Tesco. The prioritization of price has weakened the UK agriculture, so that primary producers get the smallest slice of the cake. They get about 5% of the value of the food we buy. We need a market where local producers get a fair share. In our country, the 50% self-sufficiency should be nearer to 80% in order to contribute globally.
Everywhere in Europe, the small farms and the small business sector is really in a very great difficulty. They are outmaneuvered and outcompeted by giant companies. There is a fundamental tension between small-food economy and big-food economy, and I don't think Europe is dealing with that. Again: we need policies. The tendency instead is still to internationalize, to haul food across the globe. The motorways are full of food. One in five trucking kilometers is done to transport food. The embedded carbon-intensive infrastructure is ridiculous.”

Can using waste to produce new biomaterial or biogas be an opportunity for farmers?
“In UK there's a lot of talk, some action, but not enough on this issue. I was in the government commission on food and natural resources for the Sustainable Development Commission, which was abolished by the conservative government in 2011. It was an attempt to really invest in food waste reduction, – the program was called Waste Resources Action Program, WRAP – but the only initiative that could have had political leverage over the food industry was closed down. Without governance we wasted nine years. We see some good examples, with the SDGs. But still there is a massive reliance on plastic, and little reflection on agricultural waste. Maybe plastic milk bottles have got a bit thinner. But in Britain there is no national harmonised scheme. Everyone has different recycling systems. We need a systemic change of approach for food, and we need it urgently. We can’t waste time now.”