Beyond ownership: Tool Libraries on the rise

Going beyond ownership and borrowing a blender or a ladder for a limited time at a Tool Library: despite the restrictions in place due to the COVID-19 emergency, this has been one of the simplest and most successful forms of sharing economy spreading around the world.

The process is the same as regular libraries, but instead of borrowing books, you can rent tools for gardening, plumbing, carpentry and more, at little or, in some cases, even no cost at all. In Tool Libraries you can borrow simple items like baby carriers, board games and climbing harnesses, but also more complex technologies like drones, robots and VR headsets. The common goal is simple: encouraging reuse and sharing to increase access to products in an affordable way, diminishing consumption and waste at the same time, which, according to the most recent report on Redefining Value by the United Nations Resource Panel, could have a crucial impact on reducing greenhouse gases.

Tool Libraries: from the 70s to today

The Libraries of Things scattered all over the world are in charge of both lending the item and taking care of it to ensure its good condition and long product life cycle. There were at least a dozen active Tool Libraries in US in the 1970s, but due to operational difficulties – including the lack of technological solutions –, the growth of consumerism culture and the availability of low-cost products, most of them have closed down. By the mid-2000s, only few Tool Libraries were still operational; however, there were enough left to inspire the Tool Library Movement on the rise today. The combination of the current global financial crisis causing job losses and the spread of cloud-based software and other cross-device technologies has enabled its resurgence.
With so many unemployed and underemployed people during the recession, the shift from owning things to having access to things has started sounding appealing to more and more people. The growth and excitement around the Libraries of Things is still accelerating in the momentum of non-profit organizations, entrepreneurs and public libraries showing interest in the movement, as well as schools and government institutions. In addition, Tool Libraries aren’t only about sharing items: they bring people together, creating communities. They offer an inter-generational meeting spot where elderly folk and youth alike share their skills in woodwork, metalwork, DIY, repairing and more.

Prominent among the many Tool Libraries in the world is London’s Library of Things, located in different spots of the English capital in the form of self-service kiosks set up in shared establishments such as libraries and community centers. The kiosks offer tools for DIY and gardening, as well as items you can learn new skills with like sewing machines and ukuleles, objects used to host meetings such as gazebos and speakers, and cooking utensils like extractors and ice cream makers. You can browse the catalog on the website, book the item you’re interested in and pick it up at your local kiosk. Each item is stored in its own locker: those who borrow it will receive a code to unlock it to retrieve the item, along with any other material needed for its use and maintenance, such as sandpaper or carpet cleaning pads. Once you’re done utilizing your borrowed item, it will be returned to the library in good condition ready to be used by the next borrower. Tool Library users have the tendency to borrow items for a couple of days, but loans can last as long as a week or two.
In pre-COVID times, borrowing items was also the excuse to come together and create events such as Repair Parties and Mending Meet-Ups to repair electronics, clothing or organize DIY classes. 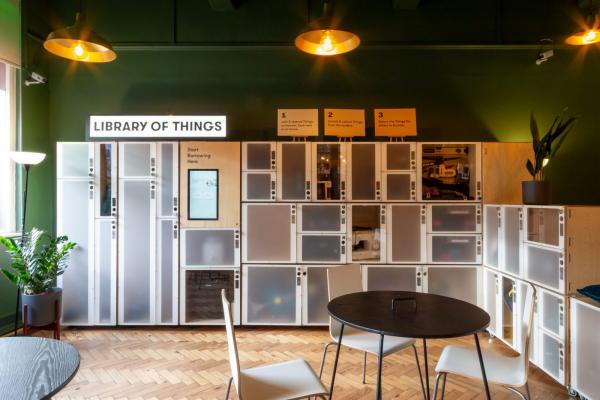 The Library of Things, London

“Like any other organization or business, we’ve had a hard time operating the way we usually do since the pandemic hit – explains Alys Penfold, Borrower Support Lead at the Library of Things – and we’ve had to adapt. In March 2020, when UK announced a lockdown, we had to close down our current standalone location in Crystal Palace, South London. Of course, all the community events in Crystal Palace were also discontinued. We did, however, run a survey on 250 Library users: 50% let us know that, at the moment, they didn’t have the tools to engage in the activities they wished to start.” And that’s where the motivation to keep going came from: “Since hardware stores are considered essential service per government guidelines, we felt like we could safely experiment with ways to keep our activity going as well, while adhering to proper precautions such as physical distance, protection and extra cleaning. In May, we created a local delivery services within 3 miles of our kiosk. Thanks to the help of local volunteers we could avoid charging extra for delivery. Once cases decreased and rules loosened slightly, we were also able to activate the ‘click and collect’ lockers at the front door of the library building we are based in. As UK government guidelines are constantly changing and the delivery service has become more complicated to manage, we recently decided to focus on the ‘click and collect’ method instead.”

Libraries of things in Italy: Leila in Bologna, Zero in Palermo and Oggettoteca in Florence

After reaching Germany, UK, Netherlands and Canada, Tool Libraries are spreading to Italy as well.
Full embodiment of the motto “After all we need to use things, not own them”, Leila was created in Bologna in 2016 and is organized as a system of small sharing points scattered around the Emilian city, to which a real library was added in September 2020. In order to have access to Leila’s 220 objects, users pay a yearly membership fee of 20€ and commit to render available to the library at least one item per member. The fee is then used for management expenses, and in addition to that, Leila offers economic, environmental and socio-cultural advantages. The various sharing points have also become the center of spontaneous meeting places for courses and workshops aimed at children and adults. Leila Bologna is part of a larger project that includes 24 other organizations throughout Europe, self-financing through work with neighborhoods and taking part in project calls, and always supported by volunteers. 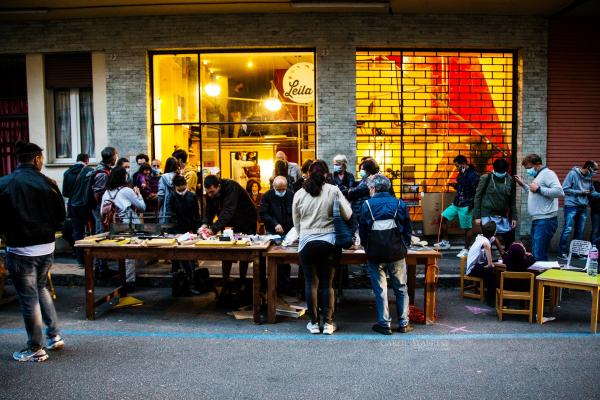 In Palermo we find Zero, the first library of things in Sicily. Zero is set up inside Palazzo Castrofilippo, home of the co-working headquarters “neu [nòi]”, a space shared by creative workers and seat of social innovation projects. Membership costs 10€ and the loan of all the tools is completely free. Zero’s first items available for rent have been purchased thanks to a 30.000€ fund obtained through the call “B-Circular, fight climate change”, promoted by the NGO Punto. Sud, through the co-financing of the European Union and through the support of Fondazione Con Il Sud. Since then, the citizens themselves have added a number of their own items that are now up for rent.
And finally in Florence we have Oggettoteca, a project born thanks to the desire and commitment of a group of parents, family and friends and created to promote the autonomy of young boys and girls, either disabled or in the care of social services. After an annual membership fee of 10€ and the request to put one or more objects up for rent, you can start renting items for a period up to four weeks. The return must take place within the established deadline, after which the members agree to donate a contribution of 1€ for each day of delay.